The Robin Hood of Asphalt 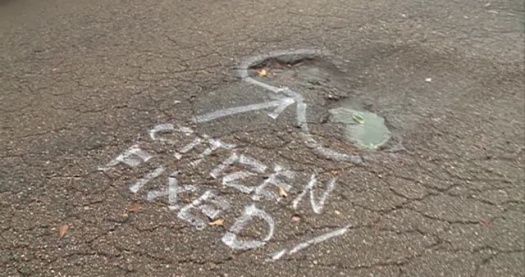 So, who is this strange man? He’s Ron Chane, and he recently came forward to ABC News and admitted to being the infamous pothole-fixer. Having fixed 101 (and counting!) potholes with allegedly stolen asphalt, Chane explained to ABC News that he signed his handiwork with his covert signature: “citizen fixed.” While no formal charges have been filed at this point, the city is looking into how Chane acquired the asphalt, something they believe he did illegally, though Chane himself sees absolutely nothing wrong with his actions.

Regardless of what you think of this bizarre story or of Ron Chane himself, there is a serious pothole problem in bumpy Jackson, Mississippi. Jackson isn’t the only US city that suffers from majorly pock-marked roads either. Atlanta, Georgia has also come under some scrutiny for the many potholes that line the city. Potholes can cause serious accidents and can pose hazards to pedestrians as well; they are a problem that needs to be addressed by both cities. But is vigilante pothole paving really the answer?

While it can be viewed as an example of citizens stepping up and doing what the city should be doing, there are actually many things wrong with pothole vigilantism. For starters, the people hired to pave city potholes are professionals; they have the equipment and training necessary to get the job done right. With no training and potentially low-quality asphalt, Chane could actually be doing more harm than good. Furthermore, vigilante pothole pavers tend to do their work at night, often without the proper lighting or other safety equipment, which means they could find themselves hit by a car or causing serious traffic accidents. And, of course, there’s the simple matter of stealing asphalt that was earmarked for other purposes.

A Right Way to Do Things

So what should you do if you live in a city like Jackson, Mississippi or Atlanta, Georgia and are tired of dealing with potholes? Well, instead of stealing and doing the job yourself, how about working to raise awareness of the problem? You could form a legal, peaceful protest about the issue, or you could get a group together and make your voices heard at the local City Hall. Or you can report it to local media, like CBS Atlanta’s Pothole Patrol. There’s also the option of gathering signatures for a petition to make your city act on the pothole problem, and if you’re truly concerned, you could even raise money and donate it to your city with the stipulation that the funds be used to fix the potholes. There are are few alternative to doing the job yourself.