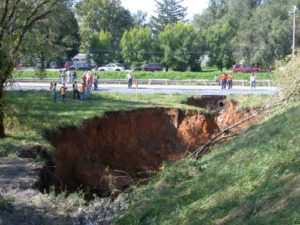 Sinkholes are being recorded with increasing frequency, so people have begun to wonder is this because of more reporting, or something else. Sinkholes caused by aging infrastructure are common. If this happens to your road surface, Dykes Paving has the experience to rehabilitate your road. However, geological reasons are also a factor in many places, including Georgia.

A sinkhole is simply a hole that opens up in the ground and is caused by erosion and the movement of water. Natural sinkholes often occur when rainwater seeps into soluble bedrock. Chalk, sandstone, gypsum salt or carbonate rocks such as limestone are among the soluble rocks prone to dissolving over time when water seeps into them. This process can take a very long time naturally.

As a natural process continues, the top layer of soil and sand above slowly falls into cracks and voids created by the dissolving soluble rock underneath. This process creates a sinkhole that is technically termed a cover-subsidence sinkhole. The amount of time the top layer of earth and any man-made structures on top of it will last depends on how thick and sturdy the top layer is, and how close this void is to the surface. However, as a hole continues to grow, eventually the surface layer will collapse into it.

The basic difference in Florida is that its territory is composed of carbonate rocks (dolostone and limestone) covered by mixtures of sand and clay. Carbonate rocks store groundwater and due to a chemical process they are prone to slowly dissolving over time. The result is a host of surface depressions common to Florida. One type of such a surface depression is a sinkhole.

As the population grows in the states, the likelihood of more sinkholes may increase. In Georgia, naturally occurring sinkholes are caused by two different reasons. Some parts of northern Georgia and in southern Georgia soluble rock causes sinkholes. Georgia is also a stretch zone state. Stretch zones in US states exist because of stresses put on the North American tectonic plate. In stretch zones, rocks are pulled apart.

It is likely the sinkhole in your area was created by tectonic activity, geological issues, or a man made problem. Generally, people in Georgia are lucky their sinkholes are usually not as deep as those occurring in Florida. No matter what the immediate source of the problem, call the paving experts at Dykes Paving when you need to repave the area disturbed by the sinkhole.