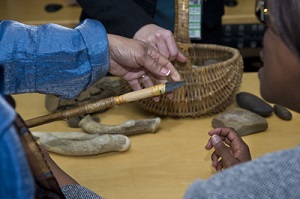 When digging up and re-doing roads or highways, most expect to find nothing more than just cement. But every now and then, road workers uncover surprising archaeological finds. From log roads at least a century old to old graves to tools that tell of past lifestyles, all of these things and more have been uncovered by road workers while doing working their job.

What Happens When Archaeological Discoveries Are Made During Road Work?

When artifacts or ruins are found during road work, usually the nearest archaeologists are contacted and asked to review what has been found. When there are few artifacts, they are set aside and saved for the coming archaeologists. But for a whole ruin or grave site (which does happen) roadwork could be stalled to make way for excavation.

Sometimes, road workers find a way to work around the ruin, so that archaeologists can excavate and do their work at the same time. Eventually though, road work does have to continue into the area, therefore archaeologists are work hard and excavate diligently.

Paving the Way for America

In 2005, road workers redoing part of U.S. route 80 in Bloomingdale, GA uncovered an old log road just four feet below the asphalt. This road is possibly dated all the way back to the Civil War or as late as the 1920s. Either way this road had a lot of history, as it is almost a hundred years old.

Some also might wonder what the big deal is about an old road, but think about it. These roads paved the way for modern day USA – literally paved! Without these roads, travel would have been more difficult in addition to the communication between towns and cities. At some point these roads were probably the only way to travel from town to town.

An Insight into Native American Culture

During road work in the U.S. last year, hundreds of Native American artifacts were found. One great find in St. George, UT is an ancient ruin that once belonged to the Shivwits tribe. There archaeologists found Anasazi pit houses, pottery, arrowheads, dinosaur fossils, and other tools they used for everyday life.

The U.K. has also had their share of roadwork artifacts. In the county of Yorkshire, road workers uncovered a Roman-era (possibly even before that) burial site. This burial site was over 2000 years old and had the only complete chariot ever found in the U.K. Despite the wear and tear on the chariot, archaeologists were able to use it and understand its functions.

In addition, within multiple areas around the U.K., road workers have uncovered pottery, farm tools, and various other items that describe life in the Roman-era farmland. The remains and bones found at various road work sites have told archaeologists about common causes of death during the era they came from and about ritualistic burial practices of the past.

You Never Know What History Will Be Found

The next time road work is happening in your area, tune into your local news or read your newspaper to see if anything has been discovered. You never know, as there could be history under the very ground you’re standing on!