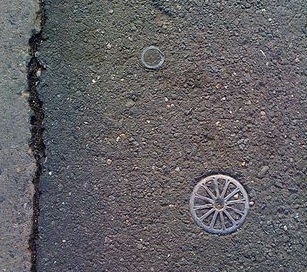 What images come to your mind when someone mentions archaeology? Chances are, you’re picturing Indiana Jones adventuring through the jungles of South America or Howard Carter opening King Tutankhamen’s ancient Egyptian tomb. But this isn’t just a study of ancient cultures. According to the Society for American Archaeology, archaeology is “the study of the ancient and recent human past through material remains.”

These photographs don’t show the ancient artifacts most people have come to expect from archaeological expeditions. Looking at Mission’s photo series, there are no mummies, bones, arrowheads, or broken pieces of pottery. Instead, there are bits of metal half embedded in the asphalt.

These urban artifacts are strange to see, strewn randomly on the street and completely without context. The objects that have been lost and eventually implanted in the asphalt of New York City are sometimes surprising. Among other things, Mission has photographed an entire padlock with nothing visibly broken about it, a long drill bit, and a set of keys. It’s an interesting testament to our fast-paced culture that people could lose these things and then walk over them day by day, until the pieces of metal have become part of the street around them.

Clues of the Past

This is urban archaeology–looking in cities to find clues about our past. By digging through-or under-more modern structures, urban archaeologists can reach the artifacts of people from previous centuries. This refuse can tell us a lot about how people in each city and neighborhood used to live. From food scraps to toys and furniture: What people were eating, buying, and using is telling of the lifestyle they had, and of their financial situation.

Unlike many urban archaeologists, Mission didn’t need to dig through New York’s streets in order to find artifacts-all he had to do was look down. Objects from the recent past can be found throughout the city’s streets, embedded in asphalt and forgotten.

The broken drill bit suggests a construction project, though there’s no way to tell if it was a personal project or a city sponsored job. The lost keys evoke the image of a hurried businessman, too rushed to realize that his keychain has fallen from his pocket. Mission’s photographs illustrate New York’s recent past by showing us how the people of the city are living.

This is a type of urban archaeology that can be practiced by anyone-photographer, archaeologist, or random passerby. Keep that in mind the next time you’re walking down an Atlanta street, be sure to look down. As Mike Mission has discovered, you never know what you’ll see.