After Ten Years, a Community Gets a Road

It may have only been a ¼ mile long asphalt road, but for the members of a Leesburg, FL community, it was a Christmas miracle.

For over 10 years, a tiny neighborhood in Leesburg has had to contend with driving to and from their homes using a muddy, pothole-ridden dirt road. This past December they were finally able to replace the road with an asphalt paved one. The community is so happy with the change, they are planning a “road party” to celebrate it. Come spring, they are looking forward to landscaping it with native plants that thrive in the lush Central Florida environment.

It was the perseverance of the president of the Homeowners’ Association of Village of Lake Pointe, Steven Metheny, that brought the road to Leesburg. But it took a lot of time, effort and money to make it happen. A string of legal issues were the first obstacles. A road was originally intended for the neighborhood, but plans fell through when the developer went bankrupt.

Homeowners had been using the neighborhood’s construction entrance. While this was the de facto road, there was another wrinkle – it actually ran across the backyard of one of the residents. The house it belonged to had actually been located incorrectly on its plot. Metheny pooled the money required – all $9,500 of it – from the dues collected from the home owners’ association.

Then the road itself had to be paid for. Fortunately, the Leesburg city government stepped in with funding of $30,000 for the asphalt paving. 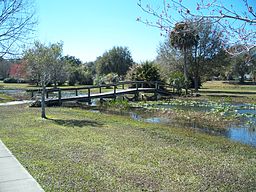 “That was a great gift,” Metheny said. “The city was gracious and fantastic in helping us in many different ways, which involved No. 1, starting with the city commission to get the vote and approval for the money to be allocated for this project and to work with public works department. It has been a challenge for many, many years, but this was a huge success for our community.”

But credit is also due to Metheny, who had to consult with innumerable lawyers and who coordinated with all the homeowners in the area to sign legal documents to facilitate the land purchase. He had to literally go house to house to get all the signatures on the required documents. In the words of Jay Evan, City Manager of Leesburg, “Were not for the efforts of Steven Metheny, I don’t know if it would have happened.”

It was just ¼ of a mile, but a paved road has made a huge difference to this community.